I told you i was going to review more of this series this month ^^  simply because when started it's really hard to stop this series and also in a few day the paperback of Ever after will be released with Bonus!! so i had to give you this little reminder^^.

Black Magic Sanction is an a great addtion to the Hollows series but  before starting it you should keep a tissues box near you, you will need it. 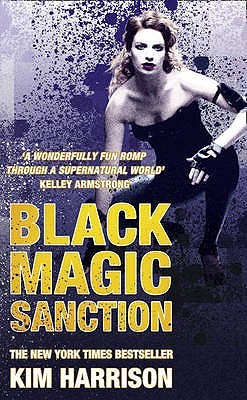 Rachel Morgan has fought and hunted vampires, werewolves, banshees, demons, and other supernatural dangers as both witch and bounty hunter - and lived to tell the tale. But she's never faced off against her own kind...until now. Denounced and shunned for dealing with demons and black magic, her best hope is life imprisonment - at worst, a forced lobotomy and genetic slavery. Only her enemies are strong enough to help her win her freedom, but trust comes hard when it hinges on the unscrupulous tycoon Trent Kalamack, the demon Algaliarept, and an ex-boyfriend turned thief.


It takes a witch to catch a witch, but survival bears a heavy price.


My opinion:
After the Hollows book 7 I couldn’t wait and I had to read more but this story is simply heartbreaking… the emotion rang deep and really not crying at the scene with Jenks is impossible at least for me…Kim Harrison found the right words and explained the situation so well that we were suffering as much as the character is no more.

The action is fast paced in this one but you are grateful for it because tension is high and you are on edge so turning the page one after the other in rapid succession was the best things… this time we see Rachel again the coven and..; against is not enough because they are not shunning her they want either to kill her or to make a sterile zombie of her….so neither solution are good. However, this time we see Rachel takes the commands with Pierce, Nick and even Al.  This time she isn’t afraid of taking some smut for what she is feeling right and she is accepting who she is, because the who is more important that “ what”. She fight for her beliefs refusing to kill when it’s not necessary, showing compassion and even finding a why to contact   without violence.

I really loved to see this evolution because it’s not a complete change either, she still has doubts, she still can be naïve, but at the same time she can put a foot down now. The way she answer the coven, how she make a deal with Al … all of that show some maturity.

I also loved Trent here, how he still act like a jerk, still can be strange but he does respect her and he interact with her in a more peaceful manner^^ ( oki if you read the book after this review you will smile thinking I said this but really they are not insulting each other they come to a form of compromise at least technically speaking). Ivy is still the same and not really interesting this time but Jenks.. really it’s heartbreaking this time like I said, he is so courageous, so funny but so deeply in love…

This time I was mostly furious against Nick… oh he did cross the line before but now it’s the “ pompom”… why Al doesn’t take care of him I wonder… it isn’t worth more! If you loved him before now you will detest him and if you already disliked him before not it will turn to hate…; him being a rat was too damn kind! Jax temporally got some bonus point but he lost them again ( yes no one is as good as Jenks)

If you love the Hollow series this is the book for you, it will keep you immersed until the end and jumping on book 9 as soon as the last page is turned. Fantastic urban fantasy universe, Kim Harrison keeps the quality and the story at a very high level! A Must read!

Second reminder: if you check here you could win a vampire book in Brenda's event so perhaps add one you are missing in this series^^
Publié par miki à 06:09