Today was really busy but there are two things i wanted to keeep time for: sharing a review with you and Brenda's contest. I told you about it already, and often, but i can't not let you know how fun it is... oki sometimes i'm tearing my hairs apart but mostly it's because i try to make to well^^  things are not as complicated as i can fear so if you have a little time to spare after reading this go  on Brenda's Blog and discover her great event and all the contests/giveaways. You will have fun.

now the second thing i wanted to do...the review! i hesitate between which one to put first online and i decided to pick vampires , i'm not planning ongiving you only vampires stories for the rest of this month don't fear, in fact there will be only one or two more and at least as much with other creatures ^^ because there must be book for everyone tastes after all^^...Also Amber was anxiously waiting my opinion on this one so i couldn't make her wait any longer^^ ( FREE on smashwords right now!! hurry get it)

Today i continue my discovery of Angie Derek (or Angelia Almos)'s universe with WhiteLighter a paranormale romance with a lot of originality and that could become a great series i think. Even better, i don't know for how long but right now it's free on Smashword so don't hesitate to give it a try please, this author really deserves it. Lily Conner is a witch with an unusual side affect to her powers – she glows like a neon white light to all supernatural creatures. A vampire who kills her will absorb her light gaining the ability to use magic. Two years ago her family was killed when a pack of vampires followed her home. She barely escaped with her toddler sister in tow. Now she lives on the run with her four-year-old sister and a vampire bodyguard.


Reyes Vega lost his whitelighter sister to vampires several years ago. When he meets Lily and her sister he knows he can’t let another whitelighter fall victim to the vampires and sets out to protect her from the same fate as his sister.


My opinion:
I can’t resist Angie/ Angelia ‘s writing style…so far no matter the genre I get immersed in her story and I can’t only regret it’s too short. This time we get vampires and witches….very original witches in fact they are called Whitelighter because their power is radiating from them and all paranormal creatures can see it especially vampires who want to steal that power, which can be done only by killing the recipient of said power.

Lily is one of those special witches and since she discovered that and was attacked, her parents killed, she is on the run with her little sister, Sophie. However, since the situation is dangerous she never met another like her and never learned how to tame or control her powers. She learned to defend herself at least from Brenda, a vampire protector, who is helping them, fighting for them but about who we don’t know a lot. Sophie is a strange 4years old, she is really calm and we don’t know what her powers are exactly only that she is different than Lily. Writing about a little child isn’t the simplest thing to do and while I do think Sophie a little too mature it can work with her powers so the author really managed well.

Her relation with Reyes is sweet, both of them have been hurt and both of them feel guilty but it’s the protection of someone else that keeps them moving and going forward. Lily wants to protect Sophie, Reyes wants to protect them both. He can only see auras and think of himself as useless but the way his minds works is the best thing that could happen to Lily to ask her the questions she needed to think on.  Sophie likes him too because he is treating her like a normal child and it was a long time since Lily could do as much. And let just says that something instinct as what keeps you alive^^

Now, I do have some question about Brenda,, in the second part of the book we learn from Lily how they met yes but I’m curious about Brenda’s point of view. Was she there by luck or was she sent to protect Lily? How the vampires against the destruction of whitelighters are working, are they trying to change mentality from inside the vampire community too? Why Reyes is different? Is it because only females can be whitelighters? Is his mother responsible somehow? (you will see after reading you can imagine the worst from her). How lily is being tracked? Etc.
However don’t worry: it’s a lot of questions but only because you do want more, while immersed in the story you put them aside quickly as Angie manage to keep the action at a rapid level and the suspense well maintained. Also you got some steamy scenes, it could feel rushed since it’s a novella but the special connection between Lily and Reyes made it feel natural too me so I wasn’t shocked or anything.

It’s a good paranormal romance if you want something short and different. To recommend 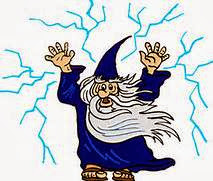 Now back to Brenda's blog because day 8 is about Wizards, Warlocks and magical beings which a Whitelighter definitively qualifies for, don't you think?

Until the last day of october 2013 you can enter to win a book of your choice ( following the rules of course) so hurry and enter HERE . Good luck
Publié par miki à 14:04