Unthinkable ( Beyond Human 1) by Nina Croft


I know it has been a moment since my last post and i'm really sorry for that but those taking care of an sick parents knows how it can be time consuming and with a lot of unplanned events.

I was supposed to post this on monday and i really wanted to because i LOVED this story but my mother fell so between ER, doctor check up etc time flew and i'm really sorry for that so with delay but a lot of pleasure i'm giving you my opinion on Unthinkable by Nina Croft, first in a new promising series 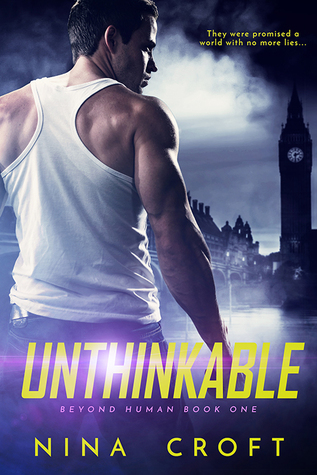 Jake Callahan, leader of the Tribe, has always believed he’s one of the good guys. Now, hunted by the government he used to work for, he’s taking a crash course in being bad. What he desperately needs is a bargaining tool, and that’s unfortunate for Christa Winters, daughter of Jake’s former boss.

Christa is a scientist, a total geek, and a good girl with a secret hankering for bad boys. Which turns out to be embarrassingly inconvenient when she’s kidnapped by a stunningly gorgeous—but obviously bad-to-the-bone—man intent on using her against the father she loves. A man with a seemingly uncanny ability to know exactly when she’s thinking about kissing him—which is most of the time.

But people are dying, and it becomes clear that the stakes are much higher than Jake ever imagined. Someone is out to obliterate the Tribe and everyone associated with it, including Christa. Only by working together to uncover the secrets behind the past, can they ever hope to have a future.


My opinion:
Fabulous surprise! I was more than tempted by the book description but the story is , so, so much better than that. There is a lot of violence and deaths but the suspense and tension is wonderfully instilled with a good touch of romance and some humour as well.
Nina Croft managed to surprise me several time and left me wanting for more despite the cliffhanger ( and you know how i hate those)

Really for me this seemed at first more of an paranormal romance suspense than urban fantasy with the investigation going one and it was a good one with still a lot to undercover, the characters are very interesting and it's hard not to feel for them. Jake feels so betrayed and guilty because those in who he believed lied to me and it resulted in the deaths of some dear to him. he wants to protects the other members and for that he thinks he is ready to do anything but deep down he is a good person and still has dreams.....even if he can be deadly

Christa isn't naïve  she is trusting, trying to see the positive all the time, she is a bit different from others but it never bothered her, she loves her job and focuses on it until a very handsome male appears and change her world.

One thing i loved is that among the tribe, even females have powers and go for what they want. it's not only a bunch of alpha male, it's a great change. I also loved that they were discovering powers slowly and often very different ones and i can't wait to see what will the powers of those we still don't know.

It's very well written and captivating with a lot of twists to keep you immersed and biting your nails in a light anguish for the characters life.

I really hope and want to continue this series and i recommend it without hesitation!