I will just take 5 minute to share with you my opinion this latest read because after doing the intendance for a Chtullu roleplaying game ( 24h) i'm completely out and i just want a such deserved nap..... i don't think i will be able to cook anything for a week at least i'm beaten, worn out...

So there are books that just the blurb makes you want to read them, with a main idea, plot  original and really interesting...but that don't meet your expectations and sadly for me Mortal Kiss was one of those. I don't regret to have tried this author but at least for now i won't continue this journey. However now that you have gotten my feeling let see my opinion in more details 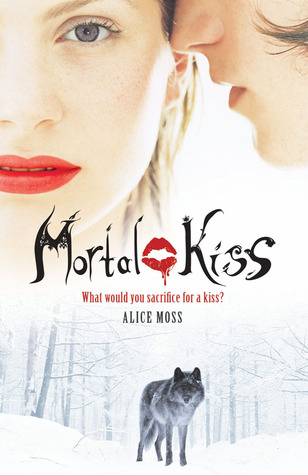 How much would you sacrifice for just one kiss . . .

When smouldering Finn and sexy Lucas arrive in Winter Mill, life starts to get very complicated for Faye McCarron.
But two boys battling for her heart is just the start. Soon there's a dead body in the woods, a motorcycle gang on the prowl, and the snow just won't stop falling. Something evil is at work, and only Faye and best friend Liz can stop it. As Hallowe'en draws near they must uncover the dark and sinister secret . . . before it's too late.


Love paranormal romance, werewolves and ethereal spirits? Then this book is for you!

My opinion:
I had this book on my shelves for several years now and i had been really interested when i was reading the blurb but at the end  i must say that i’ve been quite disappointed...the story isn’t bad per say but it didn’t work at all for me.

Faye is an interesting character and we do get immediately that she must have something special along with her aunt and the author does tell us what it is. Globaly, she is the character the most well build and the one with who i could relate or at least understand the most. She is loyal and determined.
Liz.... i didn’t like her at some point but since she was perhaps not herself i could let go but then i would really love to know if it was really her or not. Anyway, Faye consider her as a friend and while i didn’t think she was acting like one at the most critical point i’m not disliking her.

Lucas...  i don’t want to do spoiler but you do guess quickly that something is amiss... and then Finn.... he was the one that disappointed me the most....he is supposed to be matureand deeply, truly in love with Faye.. yet he is the one rushing to the ennemy at the first occasion “just to see” and even worse...he finds his soulmate after such a long time searching, one that he lost  in the past...so kind of one second last chance....and he accepts to give it up like that. Someone tells him it’s teh only way to save people so love doesn’t matter let sacrifice it.  I’m not saying it could not be an honorable thing to do but look at it that way: you finally find the one you have been searching for and you don’t even hesitate before renouncing , you don’t try to fight for her you just “ oh oki let sacrifice it”... for me it doesn’t make sense at all. It’s too irrealistic and too sudden.

Same goes for the ending...without telling you how it end the characters go back to their life like nothing happened,quite unmoved.. like it was perfectly normal....it’s too unbelievable. There is also a medium cliffhanger but really i didn’t even care for it.. the story was good but no more  as i think teh author missed soem point.... for example Faye looses her phone..so far nothing bad about it but then a few hours after Liz calls her... we only know later that she switched back to her older phone, that i can accept but then how Liz knew which number to call? She didn’t know she had lost her phone since they were not talking to each other....it’s a detail yes but there are other and  when piled together it makes me loose any interest..and i’m really not tempted to spend any cent to get the next one, perhaps the story gets better yes but  i prefer to focus on something else.