Really there isn't enough time in the day to do all we want, or have, to do... at least in my case. Right now i'm back at making list to make sure i'm not forgetting any task and it's time for the review of the week!
This time i'm going back in a universe i really enjoy via it's spin off which i think i'm even starting to like more than the main one but honestly i can only recommend to read both series and jumping from one to the other following the reading line the author kindly provided it makes the experience a lot more pleasurable. 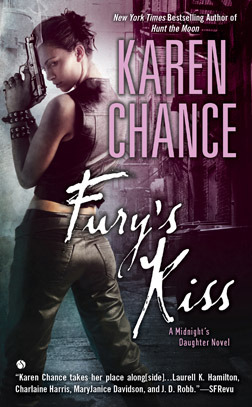 Dorina Basarab is a dhampir—half-human, half-vampire. Subject to uncontrollable rages, most dhampirs live very short, very violent lives. But so far, Dory has managed to maintain her sanity by unleashing her anger on those demons and vampires who deserve killing...

Dory is used to fighting hard and nasty. So when she wakes up in a strange scientific lab with a strange man standing over her, her first instinct is to take his head off. Luckily, the man is actually the master vampire Louis-Cesare, so he’s not an easy kill.

It turns out that Dory had been working with a Vampire Senate task force on the smuggling of magical items and weaponry out of Faerie when she was captured and brought to the lab. But when Louis-Cesare rescues her, she has no memory of what happened to her.


To find out what was done to her—and who is behind it—Dory will have to face off with fallen angels, the maddest of mad scientists, and a new breed of vampires that are far worse than undead…


My opinion:
I loved this book but I must say it was far from the easiest to read in the series…. It can even be really confusing at time with the memories from different characters, the time shifts and the mind speaking added.  I’m not sure I’ve grasped all the details either honestly but at the same time strangely I was never lost if it makes sense…
Karen Chance mastered her story in a very interesting way leading you one way then another without a reprieve but you do glimpse some info along this tortuous path and you can’t be driven wrong. In a sense, while I would not recommend it at all, this book could even works as standalone probably, though it doesn’t represent all the instalments. It has been years since I’ve read the precedent books or one in the other series Cassandra Clare (both series intertwine in the time line) but really it was not a problem for the understanding of the plot.

Dory is a damphir, as the daughter of a senate member she isn’t hunted but works with the vampires at the moment which doesn’t means she trusts them or like them….Things get complicated when she is the sole survivor of a mission and worse a mission she has no memory of….. She wants to discover the truth and for that she is taking risks….
I loved how Dory was maturing, able to put her prejudices aside for what she believes in and… getting some elements of her past was both informative and entertaining….we start to understand Dorina, the vampire part of Dory, in a new light….the author really did well by using the method of storytelling and memories travel to give them to us it fit wonderfully with the world building and what we learned in past instalments…even if it can leads to some confusion yes.
You see when Dory get full damphir mode, survival mode, it’s Dorina personality that is at command and normally one doesn’t remember what the other did ( as we were told)…so we get part from Dorina point of view and other from Dory…some actual , some from the past and the transition is sometimes abrupt.

For example we have the case of a child…but I still don’t understand how Dory/ Dorina “lost” it during their escape…because Luis Cesare never speak of him/her either….we have another mention later but is it the same child? I guess but I’m not sure and that moment I don’t know where to put it in the story frame time….. there are so many  jump between past nights and present ones that left me confused on some elements like this one.

However the main plot, the investigation, what happened etc. is perfectly clear and so enjoyable… I did guess the culprit ( a talent of mine) too quickly but discovering the “why “and “how “ along the ride kept my interest  well focused on the story which I’ve read in one sitting.

I don’t want to tell you too much because all the mysteries are part of the story in itself and you should savour it. So, I can tell you that the action is intense, the romance finally takes more importance and with Dory personality and snarky remarks the humour is a big part of this book as well. Some characters will surprises you other will moves you and you will want to beat others . It’s a great story and I can only regret that the next book, which promises to be something, isn’t released yet nor will it be soon because it’s a series I really want more of.

If you love action romance and dark humour ^^ it’s a book/series for you!