The sun is making his appearance here but not for long as spring isn't there yet. Still some sun and life seems easier, poeple friendlier andwe can only hope it will last.

Today i'm sharing with you my opinion on Wildfire by Mina Khan, as soon as the book released i was interested it has dragons and somehow  i was intriged by the cover that lead me to a false presumption of the genre of this book...paranormal mystery genre is a novelty for me but i found myself quite enjoying it and would like to discover more so sometimes mistakes are great^^ and it's the blurb that caught my interest the most anyway.

When Mina offered me the opportunity to read and review her book i was really delighted and now i do hope to read more of her but first let stay with today agenda and learn more about Wildfire. 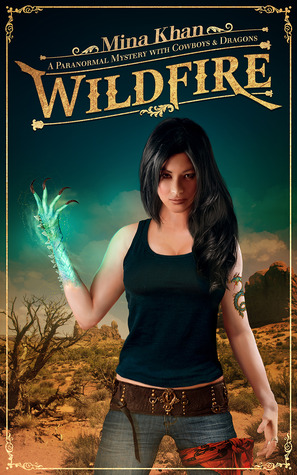 Lynn Hana Alexander is a 25-year-old Japanese American shape-shifter haunted by guilt. She’s been questioning herself and her dragon abilities ever since she failed to save her grandmother.

When her best friend is threatened by mysterious fires burning up acres of , rushes to the rescue determined not to fail again. However, with a tempting firefighter, a flirty city developer and dragon pheromones distracting her, how is she going to find the arsonist?

And worse: is her primary suspect a malicious rogue dragon or the love of her life?


*** Author's Note: Wildfire is a paranormal mystery with romantic elements. It is not a traditional romance. I hope y'all enjoy the read!

My opinion:
A enthralling reads!  I was really curious about the book as soon as I saw the blurb about dragon and cowboy and I’m lucky to be able to say that this was even better that what I expected and at the same time different ( somehow I thought it would be a little dystopian or steampunk I can’t explain^^;;)

It’s a fantasy mystery so for those new to that genre it means a world largely similar to us with a large dose of fantasy as well and the plot focus on a  mystery, a investigation more than on the romance but don’t fear romance there is^^. I really loved the story and the mystery because even when I guessed the motivation the culprit was not too evident, the romance was a superb bonus.

The characters were well built. is shapeshifter, a dragon one, from a Japanese line which means that she is a guardian. I really loved to discover the legend behind her race of dragons. However since she failed to save her grandmother, shapeshifter like her, she is filled with guilt and she is not in complete acceptance of her dragon part.
When she has vision of another dragon and feels her best friend in danger instinct kick in and she is flying to the rescues, not really expecting what she will discover in this small village. Her senses are in overdrive, scenting dragon everywhere, fires are starting again and again; and 2 males Jack the fireman which her best friend Jen see as a perfect big brother and Henri who was to be developing the land…. Using her job as a journalist to investigate she discover that both have troubled past and could be the arsonist/ rogue dragon she has come to fight  which trouble her  a lot.

When you look closely all characters have something to hide which off course deepen the mystery and make it even better to read about. Jack Callaghan comes from a very old family, one with a bad reputation in the countryside after several generations of bad behaviours (  illegal affair, arrogance, etc) but Jack isn’t like his ancestor at all. He loves history and working with his hand, he loves his lands and he is a protector in his own way being a fireman and a secret donator when needed. However old grudge die hard and the city isn’t really kind to him or giving him a chance which hurt him deeply. When appears he is attracted and the fact that she doesn’t know him is even better and he start to hope until she starts accusing him.
I loved Jack up to a point….he is loyal kind but obtuse and hurtful when confess he really act badly and in that way he disappointment me but courageous as he can be the end isn’t there.

Henri is a deeper mystery as he doesn’t come from the city like Jack so Lynn must discover via other way and while he seems charming with her his determination to buy the lands has her suspicious.

One of the character that I loved the most is Tavistock … I’m sure that man knows more than he let on and his love for Elsie was so true and deep that it was moving. In fact he is probably one of the last one really knowing the history of the lands, the secret one included.

Now, I do have a little small regret; we don’t learn enough about the dragons! I appreciated the insight given via the history of ’s grandmother, the explanations from ’s mother also helped but it was not enough. There is a mention of the council for example but his role and who are his members (how you become part of it etc) isn’t developed enough .  I would love  to see more story I  this universe to learn more but  I think this book is a stand alone so I will perhaps have to forget this idea.

Really this is a fabulous adventure for dragon lover and fan of mystery and investigation with some sweet touch of romance as bones. To recommend without a doubt

Disclaimer: Source: a copy in exchange for an honest review, no other compensation was received. All opinions are my own .

Have you read anything by Mina yet? Would you be more interested by her book with dragon or her series about the Djinn?